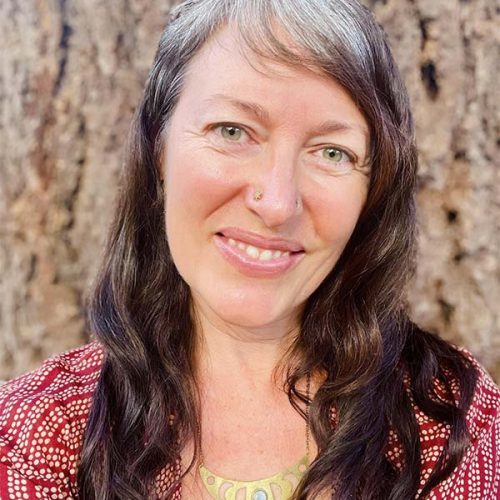 How Ritualizing Menopause Helps Us Reclaim Our Power

I don’t believe that menopause is really a simple moment in time - it’s a process, a transition, a stepping into a new era of our life. And it was also true that it felt vital to mark a moment - a year since my last moon blood - by creating a meaningful and powerful ritual to honor what I was stepping into.

This past November (2021) marked my menopause, at least by western medical standards – one year since my last moon blood.  In the communities I’m part of, the families & communities of young women are beginning to offer rituals to mark their menarch, their first moon blood, their transition time to becoming a woman.  This is wonderful and so different than the shame around a first period that I had when I was young.  And women of all ages are starting to become more open and unashamed of talking about their menstruation, and the physical and emotional experiences that come with our blood.

When it comes to menopause?  I’d heard stories of a few women creating “Croning” rituals and a few Red Tent communities (women’s circles that honor the menstrual cycle and our developmental stages as women) celebrating women moving into menopause.  But seriously, these felt like elusive mythical creatures in the overwhelming veil of silence around menopause.

Why are We Not Celebrating Menopause?

Where there’s such a heavy silence and avoidance about anything I wonder – is there something powerful and important being purposefully hidden here? Why are we so silent about menopause?  Because it means we’re aging.  What’s wrong with aging?  Well, the closeness of our mortality for sure, which our culture is deathly afraid of!  And aging specifically for us as women?  Our culture says we’re no longer pretty, fertile, or sexually available.  Washed up, not relevant, not valuable.  Turning into old hags.

And that word – hag – do you know what its true origin is?  It’s one of power.  The word comes from the Old English “haga” meaning a hedge marking the boundary between woodlands and the village, then applied to women to mean “she who straddles the boundary between the world of the village and the wild world beyond.”  It also comes from the Old English word “haegtesse” which before it came to mean a “witch, sorceress, fury” meant “a woman of prophetic and oracular powers, greatly respected.”

As my friend Victoria Loorz, author of “Church of the Wild: How Nature Invites Us Into the Sacred,” and great lover of researching the root meanings of words shares in her book, this word hag originally meant “a holy woman.”  And then, in the Middle Ages in Europe, during the time of the witch hunts, the meaning of this word changed from one of power into one of persecution (see my blog on Ancestral Trauma & Modern Day Menopause) as older women who had power and respect became at risk of being killed for who they were and the influence they had.

I’m recounting the origins of this word from a Western European history, which is what has set in motion our current cultural beliefs about menopause and older women for all of us living in the western world, wherever our ancestors are from.  But when we look at our ancestral cultures from all around the world, most of them originally had, and some still do have, tremendous respect for older women as holders of knowledge, culture, and spiritual power, the matriarchs of the family & community.

I, as you can tell from The Moon Passage, am on a mission to create cultural change to dismantle this disempowering cuItural conditioning we have about menopause and older women.  I can tell what’s brewing in me and other aging women, and it’s powerful.  And guess what – it’s dangerous, at least to the status quo!  We’ve been gathering wisdom and community and influence, and if we use that power?  We can shake things up.  There’s a reason why it’s convenient to make us think we’re losing our power as we age, and guess what again – I don’t buy it.  Do you?

Ritual is a powerful way to create clarity in ourselves, for our community around us, and for the energy of life about what our intentions are and what we are saying yes to, and I had some intuitions about what was important in my menopause ritual.  I wanted it to be in the forest near my home, connecting with the wild world that is my greatest teacher, and feeling myself not separate from the more-than-human world around me.  I knew I wanted a circle of close friends there to witness this transition and ritualize it with me.

So I set a date, and invited those nearest and dearest, the ones who have supported me through this time and who see me clearly in all my power and all my vulnerability.  I took several wanders out into the forest to contemplate and ask what this ritual needed to contain.

One of the most supportive practices for me during my perimenopause time has been to be in conversation with my circle of Wise Female Ancestors.  Unfortunately, I haven’t had living female ancestors to guide me in this transition.  But years ago, on a wilderness retreat in the Utah desert, I discovered a imaginal connection to a powerful circle of female ancestors who I can sit with, be welcomed by, be honored by, and receive wisdom from.  As I consulted with them, I felt a suggestion to start my ritual with food and song.  Song, music, food, dancing – these are ways of sharing for us as women that cross all cultures, timeless ways of honoring.  And storytelling, another timeless element of honoring – that was in there too.  Glimmers about ritually changing clothes and being crowned as a new archetype in my life.

And then a few days before the ritual, on a wander in the forest, it all came into focus.  Eating together, and then walking into the forest with a nightingale-voiced friend leading us in beautiful song.  Creating a circle of sacred space.  Telling the story of the earlier archetypes in my life, and my connection to my body and moon blood.  Ritually changing out of my clothing, and lying naked on the earth.  Being adorned by water from the creek and words of support from my sisters.  Changing into new clothing, and sharing my visions for the archetype of matriarch I am stepping into.  Being crowned with ferns from the forest. Receiving the reflections and blessings of my sisters, and the written words of those who couldn’t be there.  Closing the circle.  A few hours.  Nothing elaborate.  But so powerful….

A dear friend who loves creating ritual honed it with me, and facilitated the space for the ritual.  And it was amazing.  In those few hours, something potent happened.  And the heart of it was – I said yes, and I was witnessed saying yes.   I can say yes alone and it can be powerful, but to be witnessed creates a powerful alchemy.  We are social animals.  We are not meant to do this alone.  This has been part of the disempowerment of modern menopause – to separate us, to have us be silent, alone in our experience, not sharing tradition, ritual, or knowledge.  When we are together, witnessed, we are powerful.

This won’t be the last ritual I do for my menopause.  I can already sense that it will be important to have a ritual next year, exploring who I am another year into this transition.  And there are smaller, solo rituals that I’m doing all along the way – honoring the moon cycles, feeling who I’m becoming, asking for guidance, celebrating my journey.

The version of menopause I’ve been handed by my culture isn’t one I can say yes to – loss of relevance, attractiveness, value.  But what I’m reclaiming – the origin of the word “hag”?  That mystery and power I say YES to.  Stepping into my wisdom years, being able to listen to my body, heart, and soul in a deeper way than I ever have, having intimate communion and connection to the earth, knowing that I hold wisdom that is a gift for my human community?  YES.  This intention and transition is worth celebrating.

When we let our menopause go uncelebrated, uncontemplated, I believe that we lose part of the power of this time.  The culture of silence & shame, the patriarchal suppression of feminine wisdom, wants us to view this as just a physical event, the ending of our fertility, nothing more.  An inconvenience, a mistake.  To hold onto trying to stay conventionally youthful and pretty.

But when we look under that veil and see the wisdom & truth that is emerging from us, the fire-y temper & hot flashes purifying and burning away what’s not in alignment – we see that there is a new and powerful being emerging in us that wants to be honored, seen, and expressed.  We are no longer Maidens.  Although we will may always be a mother if we have children, we are no longer in the Mother archetype.  We are stepping into the archetype of Matriarch, a leader and wisdom holder.

How will you honor your menopause?  There’s no one right way.  It’s so individual.  For one person it might be a quiet ceremony in nature, for another with a raging party!  But I encourage you to have it witnessed.  This is a transition to be proud of, to set intentions for, to contemplate who you are becoming, and to see what the wisdom of your life is so far that wants to be shared.  You are a gift from the earth, from life, becoming a holy woman & matriarch for the world.  Let’s break the silence and celebrate our powerful menopause.